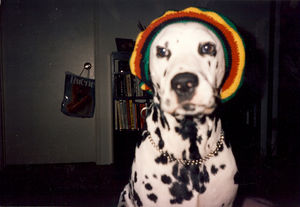 Named after Nowell's grandfather Louie Nowell, Nowell's King Louie, or "Lou Dog" as he was called, was Nowell's pet Dalmatian who became something of a mascot for the band Sublime. Lou Dog was often allowed to wander the stage during live Sublime concert performances. Louie was also often featured on the cover of Sublime albums, and was referred to in the lyrics of Sublime songs. The first lyrics Nowell sings on Sublime's major label debut album are, "We took this trip to Garden Grove/It smelled like Lou Dog inside the van". In Sublime's most successful radio track, "What I Got", Nowell sings, "Livin' with Louie Dog's the only way to stay sane." He also mentions his Dalmatian in the song other times, like in the lyric "I got a Dalmatian, and I can still get high" as well as "I don't cry when my dog runs away." The song "Doin' Time" also refers to Lou Dog in the line "L.B.C., G, me and Louie, run to the party...".

In the early 1990s, Lou Dog disappeared for a week. In a video directed by Josh Fischel of Bargain Music, "Stories, Tales, Lies, and Exagerations (Standard)", Troy Nowell (Bradley Nowell's widow) says that for the week during which Lou Dog was lost, Nowell spent a great deal of time lying on the couch crying in response to the loss of his dog. Lou Dog was eventually returned to Nowell, who, in response to the situation, later covered the Camper Van Beethoven song "The Day That Lassie Went To The Moon" and changed it to "Lou Dog Went to the Moon" ; this song is available on the Nowell bootleg "Firecracker Lounge". While Lou was missing, Nowell also recorded this song to his home answering machine as a sort of audio lost dog poster.