Stand By Your Van 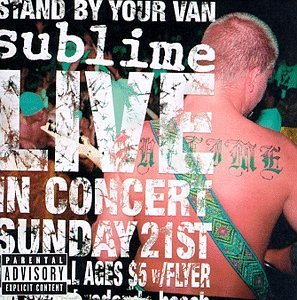 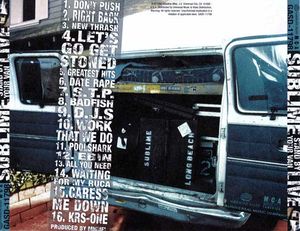 Stand By Your Van: Live Back Cover

Sublime: Bradley Nowell (vocals, guitar); Eric Wilson (bass); Bud Gaugh (drums).
Recorded live in various clubs before the band had their major breakthrough, STAND BY YOUR VAN is a collection of early songs unfamiliar to most novice fans of Sublime. What you hear is the good-spirited party-vibe of Brad Nowell before his untimely death. On the verge of greatness at the time of these recordings, Nowell and the band run through 16 songs including a track that pays homage to hip-hop legend KRS-One.
By combining ska, punk, reggae, hip-hop and dub, Sublime would have Rastas grooving, southern California punks moshing and beach bunnies soaking it up all at the same time. The vibe on all of these recordings reflects the love, respect and warmth that each and every Sublime show possessed. Tracks were recorded at Kommotion (San Fransisco), The Palace (Hollywood), House of Blues (Hollywood) and the WARPED Tour (Asbury Park, NJ) from September 1994 to April 1996. Check out the non-stop party with songs like "New Thrash," "Greatest Hits" and "STP"