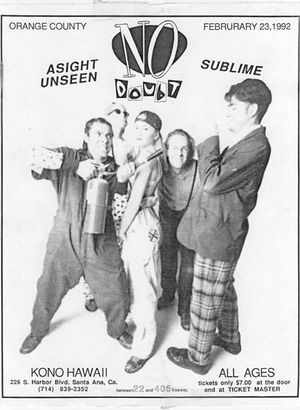 Gwen Stefani (in a KROQ interview):

Q: So how did you and Sublime hook up?" "...Me and Tony were playing a show at Spice. It must have been '88 or '89. And you know everybody always gives you tapes and stuff, and for some reason we listened to it. And it became like one of our favorite tapes. We listened to the the thing so much. It was a really bad version. It didn't hardly work."

"So we wanted these guys to open for us. We played this show at Kono Hawaii, and we were really excited and everything, and they didn't even show up. And they show up, I don't know where they had been partying, and then they show up with their big entourage. And they end up going on after us, and I watched them, but everyone else was gone. That was the first experience. And then we kept asking them to do shows with us. They weren't reliable. Then we were going to have them do our record release party."