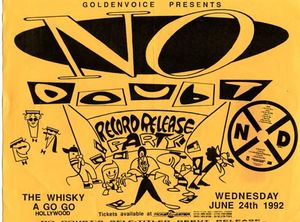 Some proshots of No Doubt at the show.

LA Times Article about No Doubt [1]

"... There's a couple of little clubs in Orange County, but we turn down a lot of gigs because we need room for our fans to slam and dance. Most of our gigs are in L.A. In fact, we just had our record release party last night at the Whisky. It was incredible. It was totally packed. We gave away a bunch of No Doubt stickers and No Doubt kazoos."

"... "We don't have day jobs anymore, but we're out of money," says Stefani, proving her point by trying to cut the conversation short and save on the phone bill. "It's almost impossible to work. What do you tell the boss--'we're leaving for two weeks?' Nobody will go for that. And there's always some band stuff to take care of. Today, I'm doing this interview, mailing back some defective kazoos. Besides that, we need to get out and play more. We have enough stuff right now for another album and a half. It's hard to pick out a set list."

Gwen Stefani (on a KROQ interview): Continued from Kono show ... "We were going to have our record release party and we were like 'Let's get Sublime, but the HAVE to make sure they show up.' And yeah, they showed up. I don't think Bradley was on stage when they started playing. "