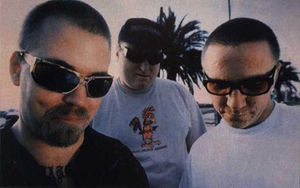 It's been a long and wild ride since sublime's first gig way back in 1988 in Long Beach, California. The explosive debut not only set off a small scale riot, but also marked the beginning of a rare, genre-busting collaboration. Once known as the “below average garage punk band that every kid wanted to play at his party,” sublime steadily escalated from a group of backyard beer buddies to a renowned musical entity. Blending a love of dance-hall and rock-steady reggae rhythms with an aggressive punk ethos, sublime amassed a nearly fanatical Southern California following that would do just about anything (or anyone?) to catch one of their blistering sets.

In 1992, realizing the hysteria they were creating, Bradley Nowell and co-conspirator/producer Miguel pawned the band's equipment and founded their own label, Skunk Records, to release and self-distribute their now cult classic, 40 oz to Freedom. “Basically, we created Skunk Records so that I could have a business card,” explains Miguel, “and so we could say `Skunk Recording artists sublime'.”

40 oz to Freedom, which was originally recorded for under $1,000, has gone on to sell thousands of copies with the first 30,000 being sold directly from the trunks of the band members' cars. 40 oz to Freedom was not only on the Billboard Alternative New Artist Albums Chart for over 50 weeks, spending the last 30 weeks in the top 20, but also broke into Billboard's Heatseeker (Top 50 New Artists Chart) while spending 5 weeks as the Billboard Pacific region #1 new artist top seller. The album became an indie icon exemplifying the synthesis of life and art. Utilizing samples off of everything from old Minutemen records, hip-hop and conversations with street denizens to just plain old bong sessions in the garage, sublime so much embodies the D.I.Y. ethic that has come back to haunt them at times. Much like the problems that De La Soul and other early Native Tongue artists experienced with using samples, sublime has was forced to pay up or remove samples from their albums. In fact, their signature sounding track, “Get Out,” which lyrically dictates the bands approach to making music, unfortunately had to be cut from 40 oz.

Robbin' the Hood, the experimental masterpiece released in 1994, also on Skunk, was recorded on a shoe string budget, partially on 4-tracks, in various living rooms and abandoned houses around LBC as well as with some charitable free time from Mr. Brett (Epitaph) at the legendary West Beach Studios (whose past occupants include The Minutemen, Bad Religion, and The Descendants). This subversive album, woven together with punk, dub and crazy spoken word, was never meant to be a follow-up to the conceptually classic 40 oz; it served as a precursor to the untapped possibilities of sublime. Robbin's eclectic bouillabaisse of sonic manipulation has now gained thousands of listeners.

Sublime's D.I.Y. ethic and intensity has garnered them shows with local and national music icons such as Firehose and Mike Watt, HR of Bad Brains, The Melvins, The Vandals, Rage Against The Machine, Avail, Ramones, Supernova, Greyboy All-Stars, No Doubt, Butthole Survers, The Mentors, The Ziggens, and of course, Duran Duran.

Over ten major tours, three vans, and one motor home later, the band sas spread its garage-hall gospel all across America, creating a rabid grass-roots following everywhere they go, especially among the surf/skate/snowboard constituency best exemplified by sublime's co-headlining gigs on last summer's inaugural Warped Tour, a hybrid of punk and skating with L7, No Use For A Name, Fluf and others that were organized by Warp Magazine. Also furthering the group's natural connection to the board culture was the Sno-Core Tour–with Guttermouth and Skankin Pickle–which destroyed ski resorts (and hotel rooms) throughout Utah, Colorado, Wyoming, Idaho, and California.

The 3 Ring Circus tour, a scary three-headed beast of a show, was conceived and released by sublime and its Skunk Records' employees on the unsuspecting West Coast in 1995. The 20-plus sold out shows on the Circus tour featured not only sublime, but the amazing and shocking talents of The Wesley Willis JFiasco and the Lordz of Brooklyn. The tour's diversity is a direct reflection of sublime's ability and drive to combine seemingly disparate forms of music and cultures.

Sublime and Bad Religion were the featured artists at the Band Aid III benefit show for Lifebeat (a fundraising organization for AIDS research) at Bear Mountain, California. Sponsored by Warp and Snowboarding magazines, the bibles of the boarding culture, the show spotlighted the top board athletes and organizations that support that subculture.

In April, 1996, High Times and Skunk Records teamed up to bring a Legal Defense Fund Benefit Show to the House of Blues in Los Angeles and Wetlands in NYC. Sublime headlined all three sold-out nights, which also featured the likes of the Greyboy All-Stars, Wayne Kramer, Weapon of Choice, Slightly Stoopid, DFL, the Wesley Willis Fiasco, and the Lordz of Brooklyn.