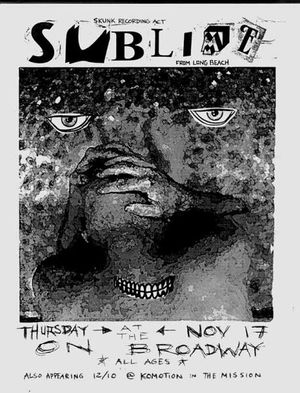 Background story to the On Broadway show as told by Mark Ferguson.

Ok, well we had heard Sublime from a bootleg taped off of a 40oz to Freedom CD a friend of our band got from Sublime when they played at the "Church of Rock and Roll" in Fremont CA, it was July 4th 1992 I think as we were having a 4th of July party. We really dug the band and related to their style straight away as we were playing similar style at that point in time.

We (actually our drummer Jim I think) had called them and asked how they went about the DIY CD thing (mostly talking to Miguel), about the pressing and distribution etc., they were nice folks and gave us some good advise. We sent them a CD I think and may have called a time or two regarding other stuff, I cant remember... I believe there were other mutual friends etc it was a long time and a lot of people ago.

We had been doing pretty well around the Bay Area at the time so we had this dude we had done stuff with before, Wes, that used to run Ruthies Inn call us to do a show and he wanted to get Sublime up to the Bay and we wanted to play with them so Wes got the On Broadway (upstairs from the Mabuhay Gardens), we made a couple calls and we ended up playing a show at the On Broadway with Sublime and another bay area band, Impact was the opener. This was kind of a big deal to us (since we actually liked the band) but they had not really "broke" yet so it was a good underground show but nothing near what they would achieve later.

Thank you to Mark Ferguson for taking the time to give us the background story on this show.