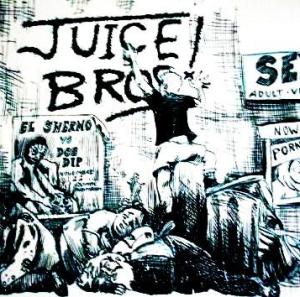 The Juice Bros (started in 1982) were a sister band to Sublime. Starting before and continuing during and after Sublime, they were known for their obscene song themes and the unorganized live performances. Getting their name from a group of brothers who sold PCP in their neighborhood, The Juice Bros preformed a more raw street punk sound, opposite from what Sublime was known for. As previously stated The Juice Bros were a somewhat active band from the early 80s through late 90s playing one off shows and having most of their music released on Skunk Records' Samplers, and a 12" LP.