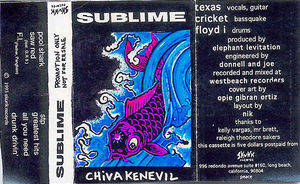 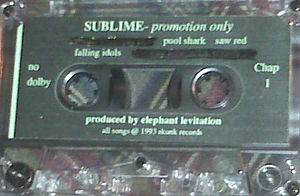 Chiva Kenevil Side A (krs-1) 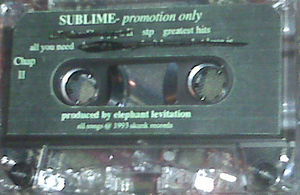 Distributed in 1993 prior to the STP Demo Tape. This demo was made by just Bradley himself.

Here is some information about "Chiva Kenevil" from the words of SublimeGman.'

This Holy Grail was made by the guys right around the time that they also released the rare “STP Demo” Cassette. This cassette came just prior to the release of the “STP” and was supposed to be their next “official” release to showcase the songs that they were working on for “Robin The Hood”. The band was partying big time and Brad was living in the STP mentioned in “Stories, Tales, Lies, & Exaggerations”.

Brad wanted to release the new stuff as “Chiva Kenevil”; which was a blatant nod to Heroin because he was way into his “Year Long Experiment” with the drug & thought that it helped him create some of his best music to date. However, the rest of the band did not want this to come out because of the drug reference & their disapproval of Brad abusing Heroin,…. they thought it was a bad idea and not professional, etc. Brad said screw that and grabbed some of the “STP” labels, crossed out the songs that were not on the “Chiva”, popped the labels on it,…. And released it anyway!! He took them around to record stores like “Fingerprints” in Long Beach, “Vinyl Solution” in HB, and “Noise, Noise, Noise” (RIP) in Costa Mesa…

Notice that they STILL hadn’t changed the “we’re too stoned to change it” address of “996 Redondo” which was a “mis-print” and should have read: “966 Redondo”. Also, notice the inclusion of “Raleigh Theodore Sakers” in the liner notes of the J-Card even though he is nowhere to be found on this cassette!!

This is because Raleigh was around, but wouldn’t be included on any “sublime” release until the “STP Demo” tape was conceived & subsequently, “Robin The Hood”.

Released in 1993,.. That’s right,.. 15 YEARS AGO!! this cassette is an integral part of sublime’s legacy & history AND RARE AS SH*T!!!. There were only a handful of these made because Brad was an adamant person & wanted "his" way, but for the most part,… this cassette shouldn’t even exist!!

The band was just about to blow up with Date Rape and were almost ready to unleash “Robbin” onto our asses, but as always, “sublime” was promoting themselves whenever and however they could. So, when they went to Westbeach in Hollywood to track some new tunes for Robbin, Brad wanted to immediately make the “Chiva” to slang their new songs to friends and fans at shows.

Because they were doing well and starting to get recognition, the “plug” was essentially pulled on the “Chiva Kenevil” cassette with only a few being made before the calls came in about “Date Rape” getting a rotation slot on KROQ in L.A. & their direction changed to the more subtle drug-referenced, “STP Demo” tape.

For your information,…The “STP Demo” tape (which came immediately after this cassette.) is essentially the “Chiva Kenival” cassette with the addition of “Boss D.J.” & “Freeway Time in L.A. County” and the exclusion of “Drunk Drivin’,…….also, of course,....."Raliegh" did not appear on this release.

Now,…. One thing that you want to notice here is the labels!!

So, here’s the deal,…. Brad had the 7 songs for the “Chiva” ready to go, but as I said, it was a source of big conflict with the band and they decided to “scrap” the idea. Then,… they moved on... to the “STP Demo” cassette, made the labels, & they only had to get the cassette pressed!!

However, Brad had different ideas…. And so, he employed one of “sublime’s” many tactics and shopped around to dub houses and told them that his band would like to make a cassette BUT that he FIRST wanted some Free “samples” (5 or 10) to show to the band and to test quality, sound, etc. before placing an order...

So,.... He took the labels for the upcoming “STP Demo” tape that the band was planning to make, crossed out the songs that weren’t on the “Chiva” cassette with a sharpie, stuck them on, made the J-Card with Opie’s Koi Fish or “Badfish” artwork,… and ‘Voila’!!!

Then, it became an “inside” joke to Brad and the band, but it also wasn’t meant to go anywhere outside of the “Skunk” circle.

So, pretty much,… this cassette doesn’t exist and you would be hard-pressed to find anyone outside of Long Beach that even knows what it is; let alone what it looks like!! Crazy huh??!!