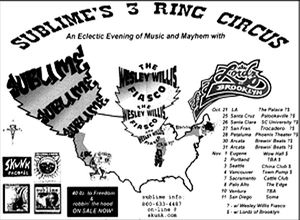 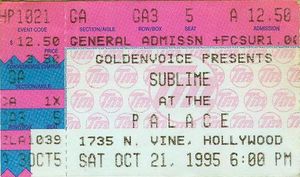 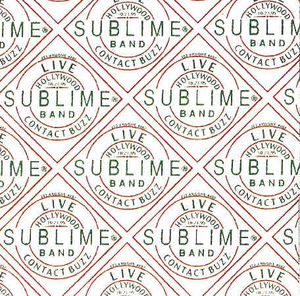 Jon Philips: About 850 crossed the turnstiles into the red carpet of the classic Hollywood venue to witness what was the first performance in a run of winter shows dubbed “Sublime’s 3 Ring Circus Tour,” featuring the hand-selected support of Chicago’s legendary chronic-schizophrenic street artist, the late Wesley Willis and his heavy metal outfit The Fiasco Band, as well as Brooklyn, N.Y.‘s Irish/Italian graffiti hip-hop ensemble Lordz of Brooklyn, both of whom had recently signed to Rick Rubin’s American Recordings. As loyal fans filed their way past the ropes, Bradley walked around to the front of the theatre from the alley alongside the backstage entrance. With his longboard skateboard and spotted Lou Dog in tow, Brad cruised the parking lot before the show and waded through the crowd of tailgaters and fans looking for tickets, amongst rumors of a sold-out box office. Nowell surveyed a crowded scene beneath the marquee out front, at one point attracting the attention of a few familiar scalpers to whom Bradley curiously inquired, “How much?” It was 1995 and legendary concerts like this were still being put on by independent promoters, tickets were cheap and fans weren’t yet victims of inflated corporate “service fees,” and on this night “miracles” were going for 50 bucks straight from the scalper who congratulated Bradley on the “sell-out,” the band’s first in Hollywood at a venue of this size!

After colorful opening sets from Incubus, Lordz of Brooklyn, and Wesley Willis & The Fiasco Band pre-heated the crowd, Sublime, led by Bradley Nowell, Eric Wilson, and the man they call Floyd I, were the obvious headliner and this was their party! Stepping up to their three-piece, power trio backline, two amps and a drum kit and amongst a crowd of their closest homies and girlfriends adorning the stage behind them like a backyard LBC throw down, Sublime appear prepared to play. The band was amped and customarily loose, adventurously improvisational and a little rough around the edges— a characteristic of what made them an endearing and sometime offensive anomaly. (The band had a reputation of being too fucked up to play, or, occasionally, simply just not showing up, both true at times). But tonight it was ON.

This recording and priceless memory would not have been possible nor preserved without the presence and passion of Gary Davis whose Rock-Steadi-Cam provides the majority of the visual magic contained within! This Hi8 footage is supplemented by the fragmented remains of Super 8mm and 16mm film salvaged by our good friend John Quinlen who had shot various shows for Sublime in ‘95. Fortunately, for us, these fellas had their cameras rolling and are responsible for the small but tasty slice of authentic Sublime contained within. The audio showcased is a combination of three audio sources to provide the best possible, full-sounding mix for Sublime’s first-ever, official full-length concert release. The core audio bed source is the original DAT soundboard mono recording by Michael “Miguel” Happoldt mixed together with the Hi-8 camera mic recording and a back-of-room mic set-up by Gary Davis, all of which when mixed together provides the feel and sounds of being right in the middle of the mosh pit. During “Ring The Alarm” you will hear a change in sound quality, this is due to the band playing longer than the soundboard DAT had tape so the Hi-8 camera mic audio is mixed in to complete the show.