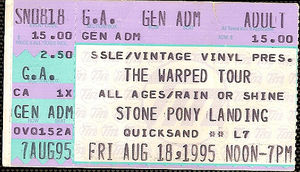 On this day, in 1995 both Miguel and I arrived on the scene back at Asbury Park with Brad's dog Louie who packed in a dog cart and flew out to reunite the two. With a substantial amount of "products" stashed in our baggy shorts bth Miguel and I proceeded to destroy the airport bar, wreck every flight attendant on American Airlines, and bum out airport security.

The passengers weren't too stoked on my catching up on my "reading" of the current issues of Swank & HUSTLER magazines (very important reading for those of you out there who need to be in a better mood)....when we showed up, Brad lit up like a Xmas tree, and Eric attacked me for the "special carry on luggage" I smuggled to New Jersey....Kevin Lyman (the founder of the Warped Tour) was ruined by our very presence....it was general mayhem, and typical shenanigans on the tour van for the next five or six shows....

I am pretty sure both Miguel and I were asked to leave the general vicinity and fly back to Long Beach...I know I had sent several personnel from that tour straight to therapy for which they have most likely never recovered.

Simply put, Sublime kicked everyone's ass on that tour, other bands were scared to death of the special sounds that were being busted out from 3 guys from Long Beach, Ca....