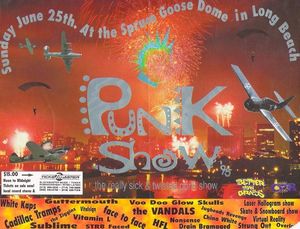 (First 6 bands are the headliners)

COSTA MESA, Calif., June 16 /PRNewswire/ -- Punk Show '95, billed as one of the biggest punk shows ever, will take place June 25 from noon to 11 p.m. at the Glen Helen Blockbuster Pavilion. Among the 20 bands scheduled to perform are Sublime, Cadillac Tramps, The Vandals, Guttermouth, Voodoo Glowskulls and face to face. There will also be a state-of-the-art laser show, virtual reality and a skate/bike/snowboard expo.

Punk Show '95 is produced by Costa Mesa-based CPR Productions and is co-sponsored by KROQ. Tickets cost $15.00 and are available at Ticketmaster.

CPR Productions was established in 1995 by Chris Martin, 21, and two partners. Despite its recent entry into the field, CPR Productions has announced its intention to compete head on with such prominent Southern California music promoters such as Avalon and Goldenvoice. CPR Productions President Chris Martin has been called the Bill Graham of the '90s.

According to Martin, "When it comes to organizing an event that will attract punk audiences, we have an edge over the main stream promoters. Not only can we more closely identify with the audiences, we're also well positioned to attract the kind of bands they want to see."

Punk Show '95 was originally located in the city of Long Beach, but was recently moved to the Glen Helen Blockbuster Pavilion due to city involvement.

"An all day punk show turned into a riot after cops were pummeled with garbage while trying to arrest someboday and the lead singer from Guttermouth got into a fight with a security guard - in the middle of a song - when the guard was beating the shit out of a crowd surfer that made it to the stage. People were ripping out seats and throwing them at the 20 or so guard infront of the stage. At one point, punkers were tossing steel drainage plates at the guards and the speakers! All the guards ran for their lives and the cops arrived, clad in riot attire and tear gas. I got scolded by a motorcyle cop waving a 12 gauge in my face. Earlier in the day caught the aftermath of a pepper-spraying. Worst of all, Sublime, (before they were popular) which were the headliners, never showed up!"