==Volume One== (Thank You Brad Harvey) 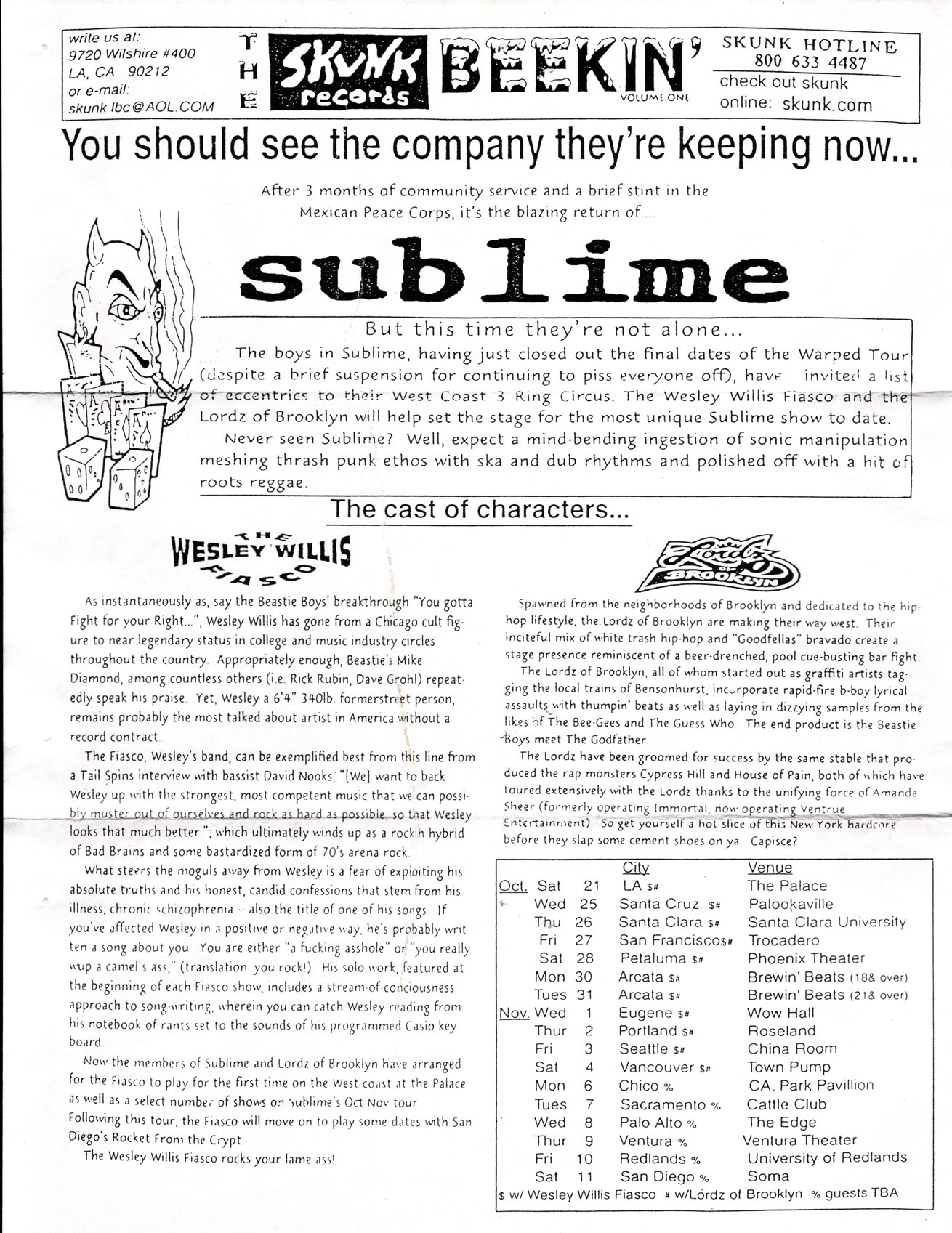 Film wunderkind Kevin Smith turned his low-dollar over the counter sleeper, Clerks, into a launching pad for his latest slack opus Mallrats, and who better to score it than Sublime. Well not exactly score it but contribute a track at least. Sublime's version of Smoke Two Joints (originally by The Toys) from the 92 release 40oz. to Freedom will help to soften the minds of mall goers everywhere if Smith's newest film impacts anything like his first indie-noir piece did last year. The soundtrack will hit stores on or around October 17th. And remember, Silent Bob says.....

As far as I know, Volume Three was never made. Anybody know something I don't about this? - Pantheon

In Brad we have lost a dear friend, an immensely gifted musician and an incredible performer. He leaves behind a musical legacy that will forever be cherished, but more importantly, he leaves behind his wife, his bandmates, and his 11 month-old baby boy. If you want to help, in lieu of flowers, please send a donation of any amount to:

Brad was a loving son, who always had a hug and an "I love you" for his father. He was very open with his emotions and told me that his wife, Troy, and eleven month old son, Jake, were his special joys in life. He also had a special place in his heart for both Nancy and Janie, both of whom he called mom. He loved his sisters Kellie, Katie, and Kristin, his brother Cory, his Uncle John, and Aunt Karen. He had a special relationship with his Aunt Julie. He loved his Grandpa Louie and Grandma Mackie, in fact so much so that he named his dogs after them. He and his dog Louie were inseparable. Where ever Brad lived or traveled Lou Dog was there even sharing his last moments with him. He greatly enjoyed all of you in his large extended family and considered you not only as cousins, but as friends in his life. His was a tender and generous soul that cared more for the welfare of others than the material treasures of life. He often expressed the love and admiration he felt toward his band mates, Eric and Bud, who he thought of as brothers.

Alas, Brad was, as all young men are, a seeker of truth and perfection, both in his life and his music. We had many a conversation over the years about the meaning of life and our place in it. He read through my shelf of used books that I acquired during my questioning early years, and he used to go through used book stores in his own search. Brad sought wisdom by reading the old philosophers and biographies of great men. He read the books of Joseph Conrad and dreamed of south seas adventures. He read accounts of man's history in search of understanding our world. He sought for the wisdom of the universe in an imperfect world only to find that man is fated only to ask the questions, the answers to which are known only to God. He looked to expand his mind and seek escape in drugs, but came too close to the edge with them and unintentionally took his own life. Brad will always live for me in his son, Jake, and we can all seek relief from our grief by loving and nurturing the son he gave us.

Brad touched many people with his caring personality and musical genius and we are all lucky to have had him in our lives. Men who have lived longer have achieved less and I am content that he is now at peace.

What I Got lyrics by, Brad Nowell (from forthcoming Sublime album) early in the mornin', risin' to the street light me up that cigarette and i strap shoes on my feet got to find a reason, a reason things went wrong got to find a reason why the money's all gone but i got a dalmation and i can still get high i can play the guitar like a mother fuckin' riot life is too short so love the one you got Ôcause you might get runover or you might get shot never start no static, i just get it off my chest never had to battle with no bulletproof vest take a small example, a tip from me take all of your money and give it up to charity lovin's what i got, it's within my reach and the sublime style's still straight from long beach it all comes back to you, you're gonna get what you deserve try and test that, you're bound to get served love's what i got, don't start a riot you'll feel it when the dance get's hot lovin' is what i got, remember that that's why i don't cry when my dog runs away i don't get angry at the bills i have to pay i don't get angry when my mom smokes pot, hits the bottle and goes back to the rock fuckin' and fightin' it's all the same livin' with louie dog's the only way to stay sane let the lovin' come back to me

The Sublime style is and will always be straight from Long Beach. The Third and final full length release is ready for you. The world of music has been blessed over the past 8 years with three full length masterpieces (40 Oz. to Freedom, Robbin the Hood, and the self-titled new album Sublime) so, to complete your collection, pick up the final installment on July 30th at any record store in the free world, bend over, and take it amphibian style.

Sublime continued its cannabis crusade by playing three sold out shows raising $2,000 for the founding of NORML's "Legal Defense Fund."

For those of you who were lucky enough to score a ticket to either one of the House of Blue's shows in L.A., or the east coast salad party at NYC's, Wetlands, know that each evening was indeed laced with something special. The April 5th HOB show was blessed with the presence of the bologna king himself, Ron Jeremy, who sliced for the crowd a perfect introduction of the band and their myriad of empty Heineken bottles.

At the Wetlands, appropriately enough, the cloud of second hand splif inside the establishment became so dense the NYC Fire Dept. was alarmed by sensors inside the club. When they stormed the doors in anticipation of flames and fury they were inversely greeted by the friendliest back draft in town. Unfortunately, nor the fire dept. or the NYPD felt the same way. However, thanks to efforts to Wetlands and Sublime Management the show was allowed to continue its mission of THC in NYC... if not for the cover of the fearless crew the minnow would be lost.

The show was the second stop of a mini east coast tour with the Wesley Willis Fiasco (Sublime's second outing with the schizophrenic mass and his loyal minions), DFL, and Lordz of Brooklyn. Towards the end of the night the Lordz and Sublime embarked on a tasty little 25 minute freestyle jam providing a perfect finale to NORML's three show benefit run.

A healthy portion of April and May were spent in Austin, Texas laying tracks for the new album. Produced by David Kahne and Butthole Surfer's guitarist, Paul Leary, it's sure to be a tickler in all the right places. The recording studio was a mere hole in the wall boasting only three swimming pools, a Jacuzzi, pool tables, a 9-hole golf course with 4wd golf carts, and a pair of red headed lesbian twins. Usually limited to plaid pants, golf clubs, and the course itself, the battery powered vehicles were often spotted making their way up the shoulder of the highway en route to the liquor store on a mission for more plasma. Pedernales, or "Willie World" as it is commonly referred to, is owned by Willie Nelson who constructed and "allegedly" paid for the studio with dinero he gained by raping Reaganomics for millions of trickled down tax dollars. Hey thanks Ron!

Keep your eyes peeled for the new "All U Need" 7 inch that just hit the streets with a b-side of the Wesley Willis Fiasco.

The death of Bradley Nowell was a painful reality for us all. The memory of Brad and Sublime will forever stand strong and smile upon all who embrace it. Peace.