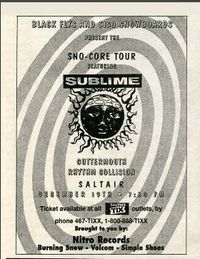 From the Deseret Newspaper:

The tour, the brainchild of a sunglasses company and a snowboard manufacturer, was originally scheduled to make its Salt Lake stop at the Saltair Pavilion. But with slow advance-ticket sales, the show was moved to the State Fairpark Horticulture Building without much advance notice. (Here's a suggestion, guys: Punk-rock fans aren't too likely to pay $15-plus for a show, especially the week before Christmas.) Basically, the promoters swapped the bad smell of Saltair for the even worse sound of the Horticulture Building.The result was a sparsely attended mess that became a running joke for the bands that played - with each group taking shots at the incredibly muddy sound.

Headlining was California trio Sublime, which was last seen being blown away at this summer's similarly disastrous "Warped Tour." At least the flabby three-piece - somebody please buy these guys a Jane Fonda workout tape for Christmas - had the sense to cut out the bad Beastie Boys rapping that makes their two CDs so unlistenable.

Instead, Sublime concentrated on bad white-boy reggae and so-so hard-core that was inoffensive at best, but sometimes ridiculous at other times (such as their horrid cover of Bad Religion's "We're Only Gonna Die"). The idea of mixing the two genres might have been innovative when Bad Brains came up with it 15 years ago, but now it's incredibly dated.

To be fair, the band did get into something good when it mixed the faster ska style with hard-core - such as the quite decent "Saw Red," which sounded much better with guitarist Brad Nowell singing without the aid of No Doubt's Madonna sound-alike Gwen Stefani, as he does on the album version.

Where Sublime failed, the appropriately titled act Guttermouth, from Huntington Beach, Calif., succeeded. The five-piece's snotty pop-punk/hard-core actually rose above the poor sound engineering to make a decent impression on the couple of hundred in attendance, as well as this cynical critic.

Semihumorous numbers like "Chicken Box," "Bruce Lee Vs. the KISS Army" and "P.C." all benefited from Mark Adkins' truly adenoidal vocals and a crunching double-guitar attack from Derek Davis and Scott Sheldon. They also got the crowd moshing, surfing, stage diving and slam dancing, especially the former, during which Adkins beseeched audience members to "chicken fight."

And the ska-punk number "Veggicide" - which points out in a tongue-in-cheek manner that vegetarians who condemn meat-eaters for taking a life are just as guilty of taking a plant's life - was sheer genius.

Trio Rhythm Collision, which hails from Agoura, Calif., wasn't quite as successful as Guttermouth. But its melodic pop-punk would have been great on any other night.

The sunny "Happy as a Clam," during which guitarist Harlan Margolis strained to have his vocals heard showed great musicianship and a good positive attitude. And "Clobberer!" showed Rhythm Collision can be every bit as funny as Guttermouth.

If Guttermouth and Rhythm Collision were examples of the good possibilities of punk, openers the Line were examples of its down side. Besides having a name so bad even a local group wouldn't take it, the quartet played a routine, purely generic pop-punk-by-numbers formula.