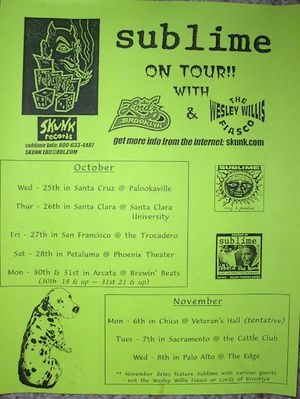 Combining punk, reggae and ska, Sublime should have the follicly challenged ska, skate and surf kids mixing it up in the mosh pit tonight at the Ventura Theatre.

Sublime, fully as subtle as winter surf at The Wedge in Newport Beach, has been at it since 1988, releasing a pair of albums on its own label, Skunk Records. The first one, “40 Oz. To Freedom” from 1992, has sold more than 30,000 copies so far. It contains a ska version of the theme from “Rawhide,” a TV Western older than most of the band’s fans. The most recent album, “Robbin’ The Hood,” was released last year.

Sublime, which enjoys a fanatical following in the South Coast, Long Beach and Orange County, has been expanding its horizons of late with appearances on a couple of other projects. The band covers Peter Tosh’s “Legalize It” on the “Hempilation” compilation, plus it covers “Smoke Two Joints” on the “Mallrats” soundtrack.

Also on the bill for the 8 p.m. show are Mr. Mirainga and The Rubberband. Unfortunately, label mates and serious goofballs The Ziggens won’t be playing as originally scheduled.