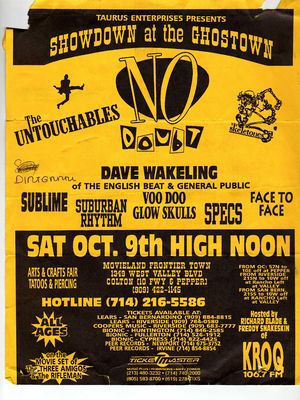 Showdown at The Ghostown

I arrived at the not-so-fabulous city of Colton ready for the big day. The location of the show was strange-- a ghost town/movie set, where The Three Amigos was filmed. I arrived to the soulful tunes of the local oom-pah-pah band, complete with leiderhosen, it was kind of a neat touch. It was kind of a weird place; I can't imagine someone seeing the ghost town and thinking, "this would be a good place for a big ska show!" The sky was overcast, which fortunately kept the temperature down (S.B. can get damn hot). The biggest drawback of the whole day was the fact that the entire lot was dirt. Put 2000 skankin' folks on a dirt lot and you get huge clouds of dust, so thick sometimes that it would be hard to see. Another minor problem was that the production company did not spend the money to get a good barricade. Instead they erected a temporary chain-link fence that did not hold up well to crowds of people.

The set-up of the show was cool. There were 2 stages, and there were 10 bands. They alternated stages, so while a band was playing on one stage, the band crews were setting up for the next band on the other stage. It was nice not to have long breaks between bands. It was hard.to even catch your breath after a band was done!

I arrived too late to see Suburban Rhythm. They're an L.A. band that have been quite popular in local clubs. They are big enough in L.A. to have earned a spot on the main stage. I've seen them once before and they're quite decent.

Then the Skeletones took the stage. I've never seen them before, but I was quite impressed with their show! I have their cd, I think it's okay, but I must say their live show kicked ass!

Then the Voodoo Glow Skulls played the second stage. They seemed to be more of a ska-core band, a la the Bosstones. I kind of cruised around so I didn't really see their show.

Dave Wakeling was next up on the main stage. He did play some English Beat & General Public stuff. He opened with "Hot You're Cool" and also played "Tenderness," "Mirror in the Bathroom," "Tears of a Clown," and a few others in addition to some solo stuff. But his show was kind of unexciting. He looked pretty good, old Dave's been working out and has some pretty big arms! But I personally think he's kind of losing it musicwise. A lot of the songs he dragged out longer than they should have been by playing the extended remix versions, and the crowd just wasn't too into it. When the emcee came out and suggested an encore, the unimpressed crowd didn't grant him one. A lot of people were getting tired, as this was the hottest part of the day, but it still wasn't great.

Next up on the 2nd stage was another band from L.A. called Sublime. I've seen them before, they're quite good, but they just weren't happening on Saturday. I think the fact that they were very drunk could have had a lot to do with it. ;) Their singer/guitarist, Bradley, kept stopping the band when they'd mess up. He'd yell, "Rewind!" and they would start the song over! They do have a locally done cd out, and like I said, I've seen them before and they were quite good. They play some groovin' reggae/ska and they're worth a look.

Then the Untouchables hit the main stage. (They have gone through so many lineup changes that they should really be the Untouchables, Inc.!!!) I've seen them before many times, and they've been both good and not so good. This show was kind of like that in itself--some of their songs were hits, others were misses. I felt that, for a lot of the show, they just kind of stood up there and played their instruments, which is quite a bit different from putting on a ska show. But other times, they were into it, so their set had its ups and downs.

Finally, No Doubt hit the stage. I am slightly biased, as this is my favorite band, but they put on a great show! I've seen them about a dozen times and this ranks up there as one of my favorite 2 or 3 shows by them. By this time in the day, everyone was very tired, so the crowd was kind of mellow, but people did eventually get into it. They got so into it, in fact, that N.D. had to stop in mid- song once to tell people to quit diving from the ghost town roof or else they would shut down the show!

Gwen, the singer, was dressed for the occasion. She looked like she came straight out of an old-time photo. They played some old standards, and also a lot of new stuff. They played a speedcore version of "Paulina" which was really funny, and they also played "Pizza Coke and Ice Cream," which they haven't played live in a while. During "Trapped in a Box," Tom, the guitar player, did his usual mid-solo dive into the crowd and was promptly dropped, causing him to swear he is going to give up that little routine. There was also a funny time when Eric (keyboards) was going to jump in the crowd and one of the bouncers tried to yank him off stage, thinking he was a troublemaker from the crowd. Their new stuff is great, too, especially the songs "Going with the Grain" and "Different People," some of their best songs to date. For their encores, they often throw in very interesting cover songs. They have done Journey's "Any Way You Want It" before, and this time they did not disappoint. Their surprise song this time (they don't even tell their friends what they'll play for their surprise song) was a GREAT ska version of the Beatles' "Ob La Di, Ob La Da." Which, if you think about it, is a perfect ska song.

Admittedly, No Doubt is not strictly ska. They mix a lot of styles in, and the ska is a major part, but if you only like strict ska then they are probably not your cup of tea. But they do put on one heck of a show! The whole day had its ups-shows by No Doubt and the Skeletones-and its downs, clouds of dust and a few lackluster performances, but overall it was a great day and I hope to see more great lineups like this in the future.