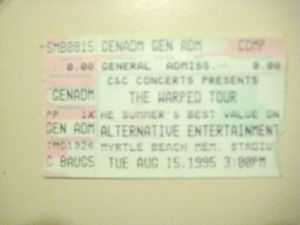 "I missed one of the shows in Florida, and after that I got arrested again in South Carolina. They claimed I threw a bottle at a police officer when, in fact, it was a crushed aluminum can and it didn't even land anywhere near him. A kid snuck in by jumping a fence to get into the show, and the security guards and cops were chasing him. The kid was making a mockery of them, running through the crowd with them tailing him. He ended up jumping another fence and got away. I was stoked for him and yelled "Let the fish swim!" I threw a can. Somebody saw it and came over and grabbed me. I had a quarter ounce of weed in my pocket and they busted me for possession."

"It was a $307 fine. Just like every other violation in their town. If you changed on the beach, it was $307. If you ran a stop sign, it was $307. If you were nude on the beach, $307. Changing in your car, $307. They had a set amount they wanted to make off every person who came through their town. I paid a fine and they let me go. In New York, though, Michael (Miguel) flew out with Louie Dog, and that put it over the top. Louie ended up biting a couple of skaters, they thought it was a liability. But Brad couldn't be without Louie."