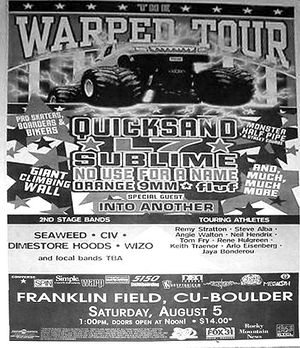 I saw Sublime play on the 1st Warped Tour back in 95. I wasn't recording shows back then.

I went to the show in Boulder Colorado on the campus. It was in a big open space. Ebbets Field maybe. L7 was supposed to headline but they bailed for some reason. I wasn't familiar with Sublime at that point. It was right after this that I started hearing buzz about them.

They played the main stage but didn't have a very big crowd. They would start a song and then get lost and just abandon it and move on (they were so wasted). People started walking away and someone in Sublime took the mic and called them pussies, or some other slur, and said that they were the show, not the other band that was playing on the 2nd stage. My friend and I just sat on the grass and watched the whole train wreck.

I'm pretty sure it was right after this that Kevin Lyman that runs the Warped Tour threatened to kick them off the tour for a week and told them to get their shit together.

I was there mainly to see Quicksand and L7. It was right around the time nu metal was taking off and I know that the Deftones played and I think Limp Bizkit might have been on the bill as well.