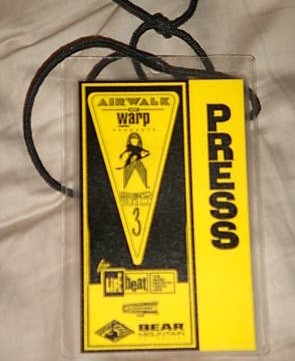 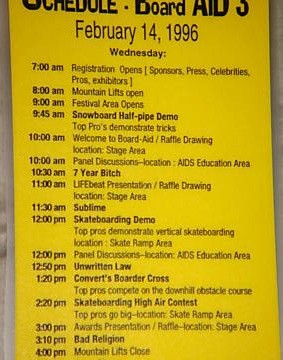 Question: DO YOU THINK BOARD AID WORKS?

Bradley Nowell of Sublime: "Absolutely. It's on their (kids) level. They listen to screwups like us. It's real important; I know somebody, I think everybody [members of Sublime] knows somebody who's got the virus.

The fact that a heterosexual person can get it is a relevant fact [that] you know we need to get out there. It's definitely non-discriminating. It's [Board AID] a wonderful way to get a bunch of kids together, and instead of preaching to them you are sending the right message, and that's great.

This is Sublime for LIFEbeat, and we are here to tell you to wear latex condoms and don't share needles. Bleach them three times, and three times in water."

At first, the outlook wasn't very good for Board AID III. Several days before the event, many of the Board AID staff were found wearing garbage bags over their clothes and make-shift cardboard box hats on their heads in an attempt to shed themselves from the rain while assembling the skateboard ramp. But as luck would have it, the clouds disappeared and the sun shone beautifully once again for all the couples who came out to support Board AID on Valentine's Day. There were over 4,000 people in attendance at Board AID III. And thanks to our sponsors and individual contributions, the event raised over 160,000 dollars to benefit LIFEbeat's Joey DiPaolo Fund.

Event highlights included the attendance of over 150 pros who performed demos for the crowd, such as the skateboarding big-air contest won by Adil Dyani and the snowboarding Convert BoarderCross competition won by Team Palmer (Shaun Palmer & gang). Booths from sponsoring board-sport, record and product companies were giving away free goodies, but with a challenge; twister games, basketball shooting, spin the wheel were all ways for one to "earn" the prizes.

Each person came away from this day alittle bit smarter on how to protect themselves from the virus and a better understanding of those living with the disease. Adding to the high-energy atmosphere of the event were the appearances of celebrities such as Seal, for whom Bear Mountain let ride for several more runs after the mountain closed in order to escape from some of the autograph hounds. Also in attendance was Seal's guest, supermodel Veronica Webb, MTV's Kennedy, and members from bands like Offspring, House of Pain, Rage Against the Machine, Mr. Marainga, and Biohazard who all met and hung out with one another during the event.

"It's really beautiful out here," Bradley, lead singer/guitarist for Sublime, said. "It's a great environment, everyone's having a great time and it's for a good cause to boot. It's great to let people listen to all the good music and watch the demonstrations while teaching them about AIDS at the same time."

Sublime bassist Eric Wilson gave his thoughts on the day after playing a short 30-minute set.

"There's some really good bands out here and I am ready to see what's going on," Wilson said. "It's a nice day today and the conditions are good."

Indeed, Board Aid 3 had something for everyone.