It All Seems so Silly in the Long Run

The following is an excerpt from the Sublime STP 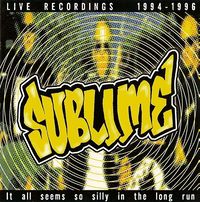 Credited to Lil' Mike of "Junk Records" (a sarcastic take on Skunk Records); what better person to tell us the tale of this mythical CD? Skip below the track list for the truth he's thoughtfully laid out for us.

The Story of Silly

by [Lil' Mike] for Sublime STP December 2012
Here's What I Recall As The Truth: The Komotion recordings were done in Sept & Dec of 1994 at two different gigs. The September show later turns up in chunks as most of "Stand By Your Van". Each gig was recorded direct to 16 track analog & ADAT via a snake run from the stage to a recording studio in the back of the building. Manager Jon Phillips & Sublime took control of the 2" Quantegy tape master tapes after the end of the gigs, we retained the ADAT tapes which were actually digitally recorded to S-VHS tape stock.

The proper name for the studio performance space we generally used was Klub Komotion... but it often ended up being referred to by the name Kommotion. It was a studio & rehearsal spot that would open up for all-ages shows on some nights to host gigs for out of town bands & benefits for non-profit orgs & causes. Amongst the many bands that played there included eventually well known groups like Operation Ivy/Rancid, Green Day, Primus etc and many dozens of lesser known talents. It was run on a cooperative egalitarian way, and everyone was was treated much the same, we served canned beers for a $1...and there was no backstage. I was honored once to hear Bud in a post mortem interview say that I was the best promoter they ever worked with, basically I wasn't the biggest, but I imagine because I never lied, cheated or took more than small share for my expenses from any band.

Sublime were a musical treat for me, the 40 oz tape they sent me blew my lil' mind. When I played it in bars as a DJ people kept asking after every song, what band this was, not believing I had been playing the same record all night. They came into my life at the right time, offering so much more than just the generic punk rock sound, with all their unique influences shown through & their musicality on a good night was amazing. I caught their killer live show whenever possible and would travel up and down the state to see them. Of course, part of their appeal was the element of don't give a f#ck danger & unpredictability, which could play out in various ways. Whether it was a skate ramp in Sacramento or a near riot in San Pedro with no notes played...each gig was a thrill, and these were genuinely fun young guys to be around.

When Bradley died, like many, I was devastated; and so disappointed, but went back into the studio a week later and quickly mixed down the shows with our in house engineer "Art Space". I intentionally used more of the December gig than would seem practical, as I knew the September gig had legit release value to Bradley's estate, and figured MCA would have little use for the drunken oft off-key, flying by the seat of the pants atmosphere of the second show in December. I felt that the 2nd show was just as representative of a Sublime concert as any other, and would offer fans a true unexpurgated audio documentation of their attitude & style.

Sublime actually was a haphazard & unwieldy unit, and a third gig/session we intended to record was aborted in spring of 1995, when after a day leisurely spent cruising the coast up from Santa Cruz & drinking beers on the way to San Francisco fizzled out. By the time we hit the SF Mission District that night, Bradley was too buzzed & distracted to record or perform. I had invited a reporter from the SF Weekly, who later wrote the Bay Area punk book Give Me Something Better, and when she saw the potential of the powerful performance I had described, evaporating into clouds of lackadaisical smoke, I could only shrug. It was still a somewhat useful session for Miguel, who managed to mix down the previously unused version of "We're Only Gonna Die" that turned up on the Badfish CD5 EP.

The address listed on the Silly CD was "275 Redondo Ave", which I believe was officially connected to a trust fund set up for Jacob James Nowell. So that's why it was on there.

The Courtney Love tape comes as an intermission between the segments, and was a tape we had transferred for a friend who was a Santa Cruz based astrologer for the SF Weekly. Courtney had been calling him and leaving rambling messages... we thought they were hilarious...and enlivened the disk, providing a nice mystery transition, and access to the mind of another warped drug addict... the more the merrier?

Finally, the last 5 songs were from what would be the last-ever live show, May 24th, 1996 at the Phoenix Theater Petaluma, CA. A lesser quality recoding method was used here and sound quality suffers from it. The songs recorded at the Phoenix Theater were recorded on a hand held Sony Walkman cassette in the balcony of the theater by my girlfriend. We just thought a few from the last show might make a nice addition to the collection, but they were obviously not of the same quality ...c'est la vie.

The CD was financed by my girlfriend's gig as a stripper, produced in a hastily arranged limited batch of a couple thousand at a local duplicator with a plant based in Oregon. I took the initial run of a few hundred on a road trip up & down the California coast offering them to surf/skate shops & indie record stores for $8 each. The remainder moved swiftly to to the world via Bob McDonald of Hank IV and the Revolver/Scooby Doo distro network at the same $8 price. They hit the streets a good month or two before the major label debut, and I heard were selling for $25 to $40 instantly. Truly, I had no idea if their actual MCA album would even break even and ever pay them a dime. Brad had been through two rehabs that cost almost as much as the recording budget... plus the cost of the recoupable advances the band had lived off of put them hundreds of thousands in debt that most major label acts never escape.

The band heard about the disc and called Revolver distro to get distribution stopped, but when they heard who was behind it, and that we had a limited number of copies circulating, they let it peter out and run it's course before any lawsuits could get started. We truly did it out of love & respect and I think it shows in the care we took making it; and why people still contact me about it over 15 years later. I haven't found a band since that have captivated me in the same way, or even close, and doubt I ever will.

Once we got the check from the distributor we took a chunk of the money and donated it to Jakob's trust fund, and gave Eric & Bud each $1000 dollars. They were grateful, and said it was the most money they had ever been paid in a lump sum up until that time. They both had no income from gigs anymore and took the money; I heard they went to Mexico to chillax. Rumor has it that the Tequila they guzzled before stumbling onstage at the MTV awards show that year and bad-mouthing MCA was paid for by proceeds from "It All Seems So Silly In The Long Run".

R.I.P. Bradley James Nowell - We Miss You Bradley, & Wish All The Love Out There Could've Been Enough... Peace.