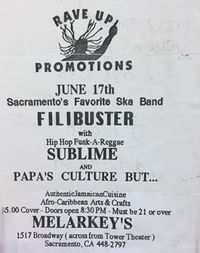 sublime opened for Filibuster at Melarkey's 1517 Broadway (across from the Tower Theater, Sacramento, CA, Supporting band was Papa's Culture But... This was sublime first show in Sacramento and Filibuster - 1st show ever on a bill with sublime. Promoter was Rave Up Promotions.

Recorded by John Taylor - audio engineer. Transferred and process by Jim McLain in 2016

Both sublime and Filibuster set were leaked in 2018 by Jim.

Filibuster set only 35 minutes of the show was recorded before the tape got cut off.

According to Rodney of Filibuster in 2020 '..that was our first meeting. I remember like yesterday. Brad and I got really high before the show. He kept saying he wanted a Lou's burger (L.A. burger stand) we were in the parking lot of Willy's burgers. Being that I was originally from L.A. area, I pointed and said, let's eat at his cousin's. Willy and Lou opened the L.A. stand together and Willy took the menu up north. That day, Brad and I became brothers'