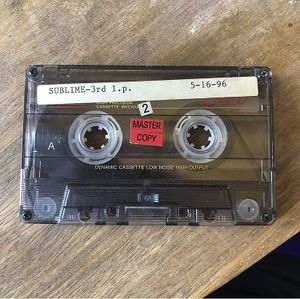 IT STARTED OFF as just a joke," recalls Bud Gaugh, speaking over the phone from his Orange County home. The drummer for sublime, a Southern California-based reggae-punk band so sublime that they don't even bother with capital letters, is explaining why his band records on the mysterious Skunk Records label, and not with some better-known outfit.

"We were playing parties in L.A. back in '87 and '88, and we thought it'd look better if we were signed, so we called ourselves 'Skunk recording artists sublime' on our posters. Later, we actually started the label just to distribute our own record."

But eight years, 250,000 albums, and a surprise radio hit later, no one's laughing anymore. With an industriousness that belies the band's laid-back, "party on, dude" image, the members of sublime set out to self-distribute their debut album 40 Oz. to Freedom, recorded in 1992 for a little over $1,000. "The first 30,000 we sold from the trunks of our cars at shows," says Gaugh.

With the momentum built from the band's incessant touring and the flogging of its album to every record shop in sight, 40 Oz. to Freedom went on to become a cult classic and a necessary audio accompaniment to many a pot-fueled dorm party.

But if their album's success started the buzz surrounding sublime, the smash hit status achieved by their single "Date Rape" on radio stations across the nation made it louder than a swarm of angry killer bees. "It's strange, because that's one of our oldest songs," says Gaugh. "An intern at KROQ [L.A.'s influential, 'modern rock' station] kept telling the people there about it, and they finally started playing it. It became their most requested song ever, and it just went from there."

As a song, "Date Rape" matches a rollicking ska instrumental with a witty morality tale, evincing a pro-woman slant unusual for a party band from Orange County. Asked about the song's peculiarly feminist perspective, Gaugh replies: "I suppose it's just because I wouldn't like to be violated in the way the song describes. A lot of people took that song the wrong way, but you're right, it does have a very feminist message."

For those who haven't heard "Date Rape," in it a young woman is assaulted by a handsome man she meets, then bashes his head with a rock and gets him arrested and sentenced to prison, where the rapist is forced to, er, take his own medicine. "You could say he gets it in the end," Gaugh snickers.

With the success of "Date Rape" kicking their careers into high gear, sublime's upcoming schedule looks to be a hectic one, with a new album nearing release, another one in the works, and the band hitting the road to play gigs first on the West Coast and then in Europe, opening for punk dynamos Pennywise.

In an age when giant corporate-owned record labels are rushing to sign every band with a body-pierced singer and "alternative" credibility, members of sublime are in no hurry to surrender their independence. "We'd really like to keep on putting out albums ourselves," says Gaugh. "I mean, we don't need to sell as many albums as Tupac Shakur. All we want is food on the table, a roof over our heads, and enough gas in our van so we can drive up and play a goddamn song for you all."